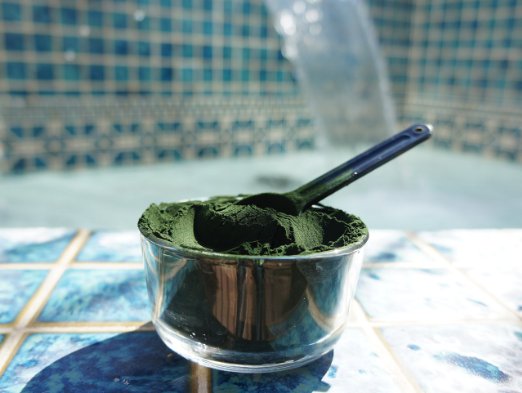 Spirulina for bad breath?? What? Spirulina might be the last thing you think of when it comes to taking care of bad breath. I mean, it smells awful and has such a strong taste. But the thing is…. It “might” actually work.

How does spirulina cure bad breath?

The reason spirulina may be able to cure your bad breath is because it has chlorophyll. Chlorophyll is the main pigment in spirulina and is what gives it its deep green color. It has a much higher content than that of green leafy vegetables. Spirulina is one of the richest chlorophyll foods on the plant. How much does it have? I’ll go over that below.

Chlorophyll is proven to cure bad breath and is even marketed in breath freshening products all over.

However, its effectiveness is still the topic of a lot of controversy.

It all started in the 1950’s when an internist named Dr. Westcott began studying the effects of chlorophyll. He found that anemia patient’s urine had a less strong odor after the supplementation of chlorophyll.

He was exited by these findings and decided to test these “odor eliminating” properties elsewhere. Two more studies were performed, one on underarm odor and another on breath odor.

The study of breath odor was performed on 12 college kids after drinking onion juice. After the supplementation of chlorophyll the odor was significantly less. And besides this study, Dr. Westcott performed a number of others on the odor eliminating powers of chlorophyll.

With all of his findings, Dr. Westcott then concluded that chlorophyll could cure breath odor, body odor, menstrual odor, and urine/fecal matter.

You may have heard that this isn’t true

There is a lot of controversy when it comes to the benefits of chlorophyll.

Chlorophyll has been said to NOT HAVE ANY deodorizing properties, whether it be breath, underarms, fecal matter, urine, etc.

According to William T. Jarvis, Ph.D from the National Council Against Health Fraud, it doesn’t! And the reason for this is that chlorophyll cannot be absorbed into the body.

But Chlorophyll is now PROVEN to benefit your body

I don’t know what William T. Jarvis, Ph.D was thinking when he said chlorophyll cannot be absorbed into the body, thus giving no health benefits.

Because its been proven that it can be absorbed now. In 2001 there was a study published in the Journal of Agricultural and Food Chemistry that shows that chlorophyll is absorbed during digestion in the by the intestinal cell [1]. This chlorophyll can be beneficial to us humans.

So does chlorophyll work or doesn’t it work?

Even after the study in 2001 came out there still are a lot of stubborn people that refuse to believe that chlorophyll is beneficial to people.

But I’m going to side with the proof that it does work here. Why? Because there is more evidence supporting this side.

Other benefits of chlorophyll

If chlorophyll is actually absorbed by the body, as the study above suggests along with others, then it has many benefits. Besides freshening your breath and helping to eliminate other bodily odors, chlorophyll can also

And these are just a few of the many benefits of chlorophyll.

So how much chlorophyll does spirulina have??

Of course you need to know the answer to this.

Well according to a study published in the International Journal of ChemTech Research in 2014, dried spirulina’s weight is comprised of anywhere from 1 to 3.5% chlorophyll [2].

So that means that for every 10 grams of spirulina you are getting anywhere from 100 to 250mg of chlorophyll!!! And thats a ton. Thats for just 10 grams, which is a about a heaping tablespoon. If you look at chlorophyll products for bad breath they are usually dosed around 100 – 200mg per serving.

The reason that the chlorophyll content of spirulina varies so much is due to conditions in which it was grown. The biggest factor is the amount of sunlight it gets because of chlorophyll being a photosynthetic pigment.

So get spirulina for your bad breath, or just body odor in general

Spirulina has a VERY high chlorophyll content and chlorophyll is proven to help eliminate body odors, such as bad breath. So if you have bad breath and you have always thought it was just an unfortunate part of life, TRY SPIRULINA before you give up finding a cure.

Besides just the ability to cure bad breath, spirulina has a considerable amount of other health benefits (check out the menu at the top of the page). Its an all around good and natural health food.

But if you are going to buy spirulina you have to be careful. Spirulina has an innate ability to absorb toxins from its surroundings. This can be good if you are taking spirulina to detox, but bad if the spirulina is grown in a polluted and/or toxic environment.

To avoid getting “bad” spirulina check out the spirulina products I have reviewed and recommend below. I only recommend high quality spirulina that comes from credible sources with many quality assurance safeguards in place.

Click on what type of spirulina product you want to buy: